When Margaret Hance became may 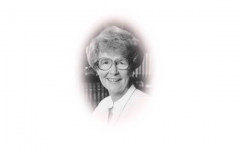 or of Phoenix in 1975, she was a member of a very small club of women elected to run a major city in the U.S.

But her rise in politics (and ultimately a career in public service at the national level) was grounded in a commitment to voluntarism at the local level.

As a “stay-at-home mom” in the 1950s, Margaret lived the lesson she’d learned as a child: that if you had enough food and a roof over your head, you owed service to your community. So she was indeed active in many community organizations, beginning with the PTA, Cub Scouts and Little League, and expanding to include the Phoenix Parks and Recreation Advisory Board and the Junior League of Phoenix, where she served as President from 1959-1960.

With the death of her husband, Richard, in 1970, however, Margaret set her focus more fully on city government, and in 1971 was elected to the Phoenix City Council. Committed to improving the city’s park system, she led city government’s effort to purchase and preserve for public use the Phoenix Mountain Preserve.

After a second term on the council, and serving as vice mayor, Margaret made a bid for mayor in 1975. She won that election, along with an unprecedented three additional terms.

During her time as mayor, Margaret worked to attract new businesses to the area and to revitalize downtown Phoenix. She began the plans for the building of public spaces including the Arizona Science and Technology Museum, and expanded the city’s outdated freeway system.

After returning to Phoenix, Margaret continued to work in national politics, chairing Vice President George H.W. Bush’s campaign in Arizona in 1988, and serving as head Arizona delegate to the Republican National Convention that nominated him as its presidential candidate.

Although she passed away from cancer in 1990 at the age of 66, Margaret amassed many awards recognizing her civic leadership. Additionally, the Arizona State Senate passed a resolution posthumously enumerating her accomplishments and, in 1991, she was inducted into the Arizona Women’s Hall of Fame. In 1992, a new 32-acre park in downtown Phoenix, was dedicated in her name.

Margaret explained the impact of voluntarism on her political career in a 1975 article in The Harvard Crimson: “Because of my past experience I had no problem presiding. Through volunteering, I had to learn discipline, work habits, and a broad knowledge of the community.” She continued with her view on women and governing: “A woman’s way of looking at things in government is a different approach. She is more aware of juvenile problems because she lives with the children. Her way of looking is not necessarily better, just a different perspective. She’s less afraid to ask questions, and not embarrassed to admit that she doesn’t know something.”

*This article was originally published in connected, an official publication of The Association of Junior Leagues International, Inc., and has been reprinted with permission.