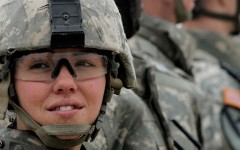 It’s no secret that women are critical to the nation’s military branches, whether as serving members or as the wives who keep families together during long and often dangerous deployments of loved ones. Leaving the military to rejoin civilian life also has its own hurdles.

That’s why a growing number of Junior Leagues have turned to programs that address the needs of military families both while they are serving and as they are leaving the service.

A great example is Between the Lines, a national program begun by the Junior League of Portland. Here’s how it works. Deploying Oregon National Guard parents choose a book for their child and League volunteers make a recording of the parent reading the book. On deployment, the recorded story is sent to their children in a CD format along with a new, gift-wrapped copy of the book. (The format of the successful program was originally developed to support a continued connection between incarcerated parents and their children.)

Working from another direction, the Junior League of Richmond’s Boots to Suits initiative is a clothing voucher program for male and female veterans transitioning from military life to civilian careers. The program, which also supports spouses of veterans who are seeking jobs and are the main provider of the household, provides them with appropriate clothes for both the job search and on-the-job wear at JLR’s two The Clothes Rack resale shop locations.

For more than 10 years, the Junior League of Huntsville has hosted the Butterfly Project to provide prom attire to deserving high school students in the community. This year, JLH has expanded the program, in partnership with the Semper Fi Community Task Force of North Alabama, to provide formal attire and accessories for female wounded warriors and the spouses and caregivers of male wounded warriors to attend the Military Ball, one of the events of the Semper Fi organization’s annual Heroes Week, a celebration of wounded veterans across all branches of the military. Each year, approximately 30 wounded women veterans from around the country are chosen to be recognized at this event.

*This article was originally published in connected, an official publication of The Association of Junior Leagues International, Inc., and has been reprinted with permission.